An adventure series with the premise that many of Jules Verne's most-famous novels were based on actual events he experienced. The first season has the show traveling the globe and landing in Napoleon's Paris, Russia, India, East Africa, Egypt and in the United States during the Civil War.
Jules Verne and his Characters are confronted by the wicked League of Darkness which stalks Europe and the New World in the company of the undead, demons and hostile extra-terrestrials (Thats what one review says!..Andrew).

Episodes were shot in Sony's HDCAM(R) format with the Sony HDW-700 High Definition video cameras - making this the first TV series shot specifically with high definition TV in mind ("true HDTV" 1035-interlace format). (The HDW-700 digital widescreen high definition camcorder is a full RGB 2 million-pixel CCD camera with 10-Bit 74.25MHz DSP processing of the RGB video. The camcorder was designed as a one-piece highly mobile and robust field acquisition system. It is supported by the HDW-500 studio VTR with enough versatility for all HD editing and post production demands. The camcorder uses Sony's BCT series HD half-inch metal particle tape. The standard small cassette allows 40-minutes recording in the camcorder. The HDW-500 VTR can record two hours on the standard large cassette)
Pierre de Lespinois, executive producer for Talisman Crest Limited, said, "Using the HDCAM format also allowed us to review scenes immediately, reducing hours of down time, unnecessary re-takes and lag between shooting and content confirmation associated with film production. The immediate peace of mind knowing you got the shot is priceless. "In one instance, we set a stunt man on fire and barely captured the shot. Shooting with film, we could not have known if we had the shot, but reviewing the footage on a monitor nearby, we knew we could dispense with the time, expense and risk of a second take." (source: BUSINESS WIRE 30/08/1999)
Digital visual-effects production and post-production were provided by The Voodoo High-Definition Studio (Voodoo HD), under the direction of Richard Ostiguy and William Kendal.
"Funds for the series came from FlashPoint (UK) and Film Line in Canada and German TV and homevid distributor Helkon Media, and Classic Media Distributors. With a budget of $1.2 million per hour show, The Secret Adventures of Jules Verne is an ambitious production that combines period settings, science fiction and special effects, and is gadget-and gizmo-heavy, which appeals to financers and toy manufacturers alike...." (source: VARIETY 04/10/1999 P59) 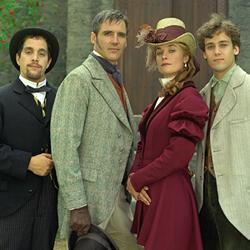