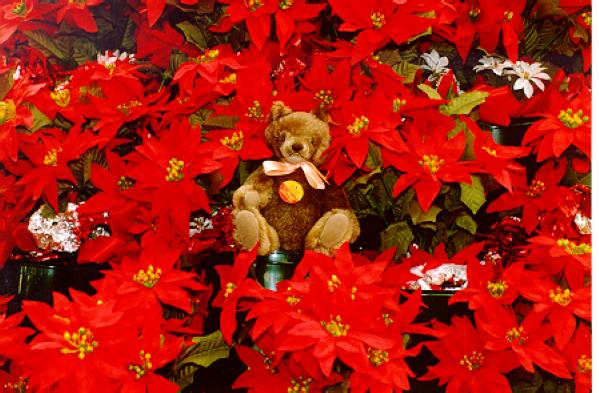 This Christmas photograph taken in the airport in Miami Florida.

As a child, my bear was a Steiff Teddy Bear given to me by my mother, probably in 1957 or 1958. Over the years he lost so much fur, from so much loving and hugging that my grandmother made some overalls for him in the 60's to make him look more decent! He still wears those overalls, and still has the replacement 'button' eyes, that replaced the 'stick-pin' eyes that he came with. How safe are those for children! Someday, when I find his eyes, I have them stored somewhere, I will return his face to the way he originally looked.

My love of Steiff bears did not become an obsession of 'collecting' Steiff bears, but became a passion of giving Steiff bears as baby gifts, to the babies of friends. This practice may have come to an end, now that Steiff bears are so outragiously expensive! But I will probably continue to give Teddy bears of some sort.

My baby gifts though, were/are not simply the giving of a 'lifeless' bear. I decided to personalize the gift by first taking photographs of the bears, and making a story book. My idea for this came from the children's books of 'Dare Wright' who wrote the story and took the photographs for the books The Lonely Doll, The Doll and the Kitten, The Little One, and 'Holiday for Edith and the Bears'. These books were a great inspiration, and because of this, my hobby has produced some interesting photographs, and some interesting reactions!

When I proposed to my wife, I wanted to do it in a unique way. Once again, a Steiff teddy bear played an integral part, as I photographed a new bear in places where we had dated, and then later presented my wife-to-be with the bear, the book and a proposal.

Click on the following links to see some of the photographs of my bears in various situations not only here in Toronto, Canada, but also in France, Italy, and Washington State, among other places!

The bears and their photo assignments have been: